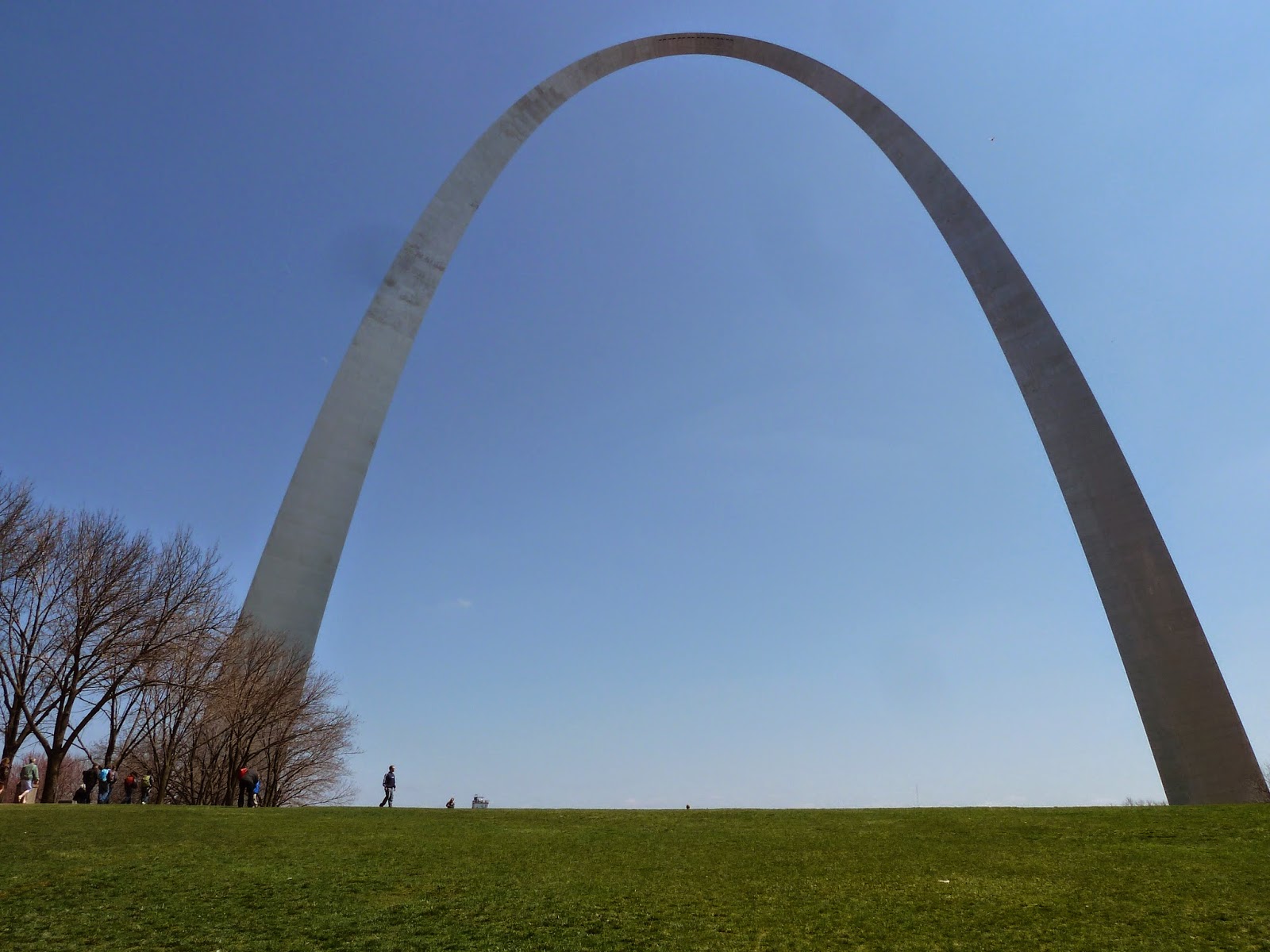 This past weekend I ventured outside of my comfort zone to a land our ancestors called "St. Louis" and to a convention the geeks call "Comic Con." Because I am a geek (and I also have ancestors), I fit in much better than I had originally anticipated. See, a week ago I viewed myself as less Comic Con and more Comic Sans (you know its name, but sometimes you just want it to calm down or go away all together). Less Marvel-ous and more Narvel-ous (inside joke).

So, when I bought my Nathan Fillion (Castle, Firefly, Serenity, Dr. Horrible's Sing-Along Blog, Waitress, my dreams) VIP ticket less than a week before the show, I didn't really know what I was in for. Turns out, it was amazing and incredible and now on the top of my list of memorable St. Louis things (formerly: 1. arch; 2. Nelly; 3. Mark McGwire). 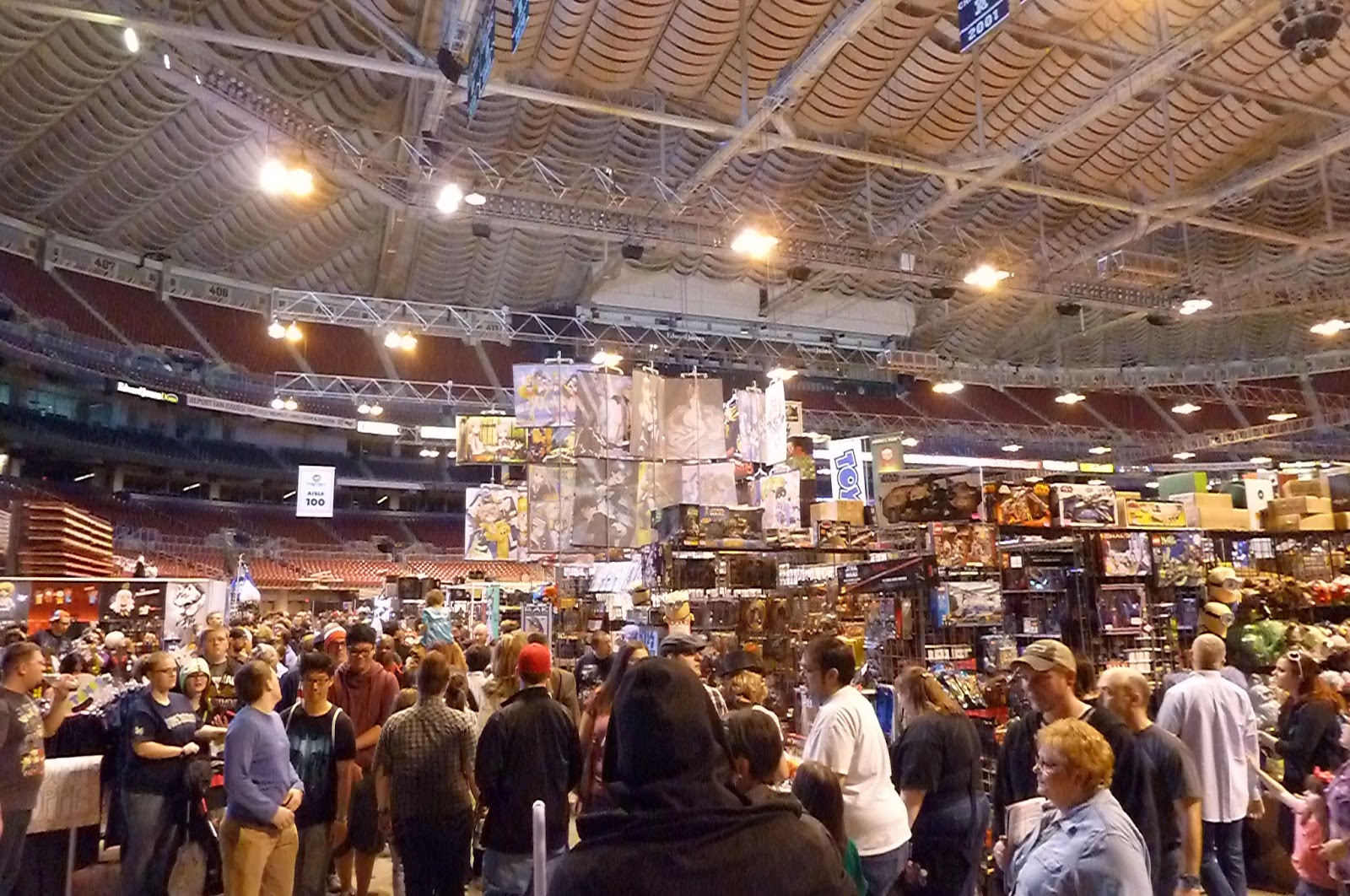 I got to the three-day event (official title: Wizard World St. Louis Comic Con) Friday evening, and I checked in to the convention to get my VIP wristband, lanyard, Nathan Fillion photo op pass, Nathan Fillion autograph pass, and Nathan Fillion exclusive lithograph. He wasn't scheduled to appear until Saturday night and most of Sunday, but I wanted to be completely prepared. Not to mention, there were other celebrities of yesterday and today appearing all weekend, including Matt Smith and Karen Gillan from Dr. Who, William Shatner, Adam West and Burt Ward of Batman and/or Family Guy fame, Sean Astin from The Goonies and Rudy, Milo Ventimiglia from Heroes and Gilmore Girls, Eliza Dushku from Buffy and Dollhouse, and more. I ended up only getting a glimpse of Ralph Macchio (the original Karate Kid, cousin of Vinny) and Adam Baldwin from Firefly/Serenity, so I got my swag and prepared for a weekend with my "big damn hero," Nathan Fillion. 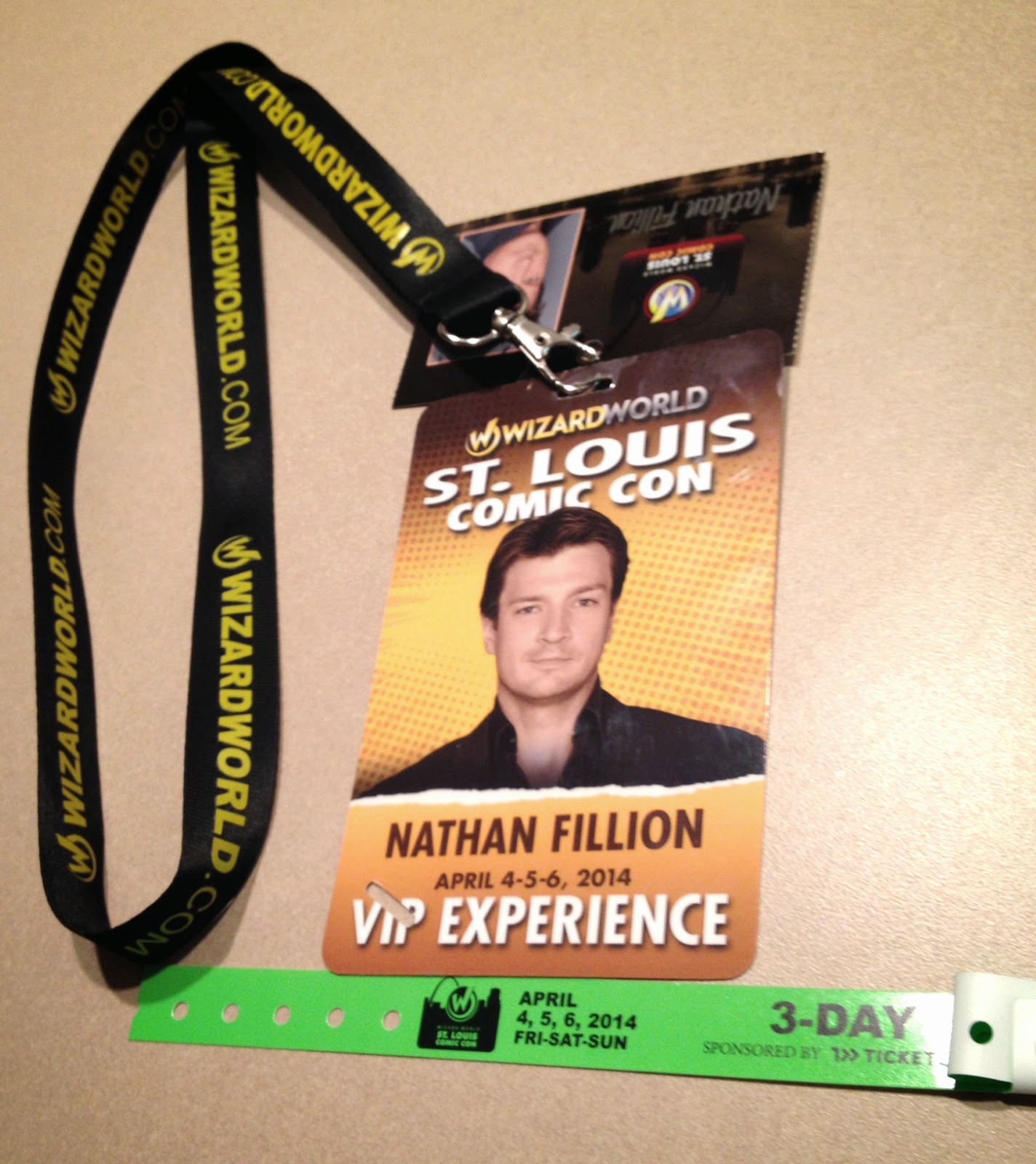 Saturday, I spent some time walking around the Comic Con venue, which was housed in the Edward Jones Dome (where the St. Louis Rams play football). In addition to the impressive array of cosplay by adults, children, and babies who had no idea where they were (but were totally adorable in their gruesome Walking Dead, Tardis, and other costumes), there was row upon row of incredible art that ranged from handmade leather journals to canvases and prints to comic books and more. I bought this amazing Danny Haas Firefly print for Nathan to sign the next day. At this time, Nathan had arrived for the first item on his schedule, which was to sign autographs for an hour before heading to the photo op booth for fan pictures. Because I wanted to spread out my Nathan enjoyment, I decided to hold off on getting his autograph until his Sunday session and just watch from afar as he gloriously picked up those multi-colored Sharpies and gave each fan a treasure for a lifetime. As it turned out, he was fighting a pretty bad cold/cough and would regularly "sanitize for [our] protection" and disappear under the autograph table for periodic nose blowing. I'm pretty sure, though, that getting sick never felt so good as when catching a virus from Captain Mal himself. 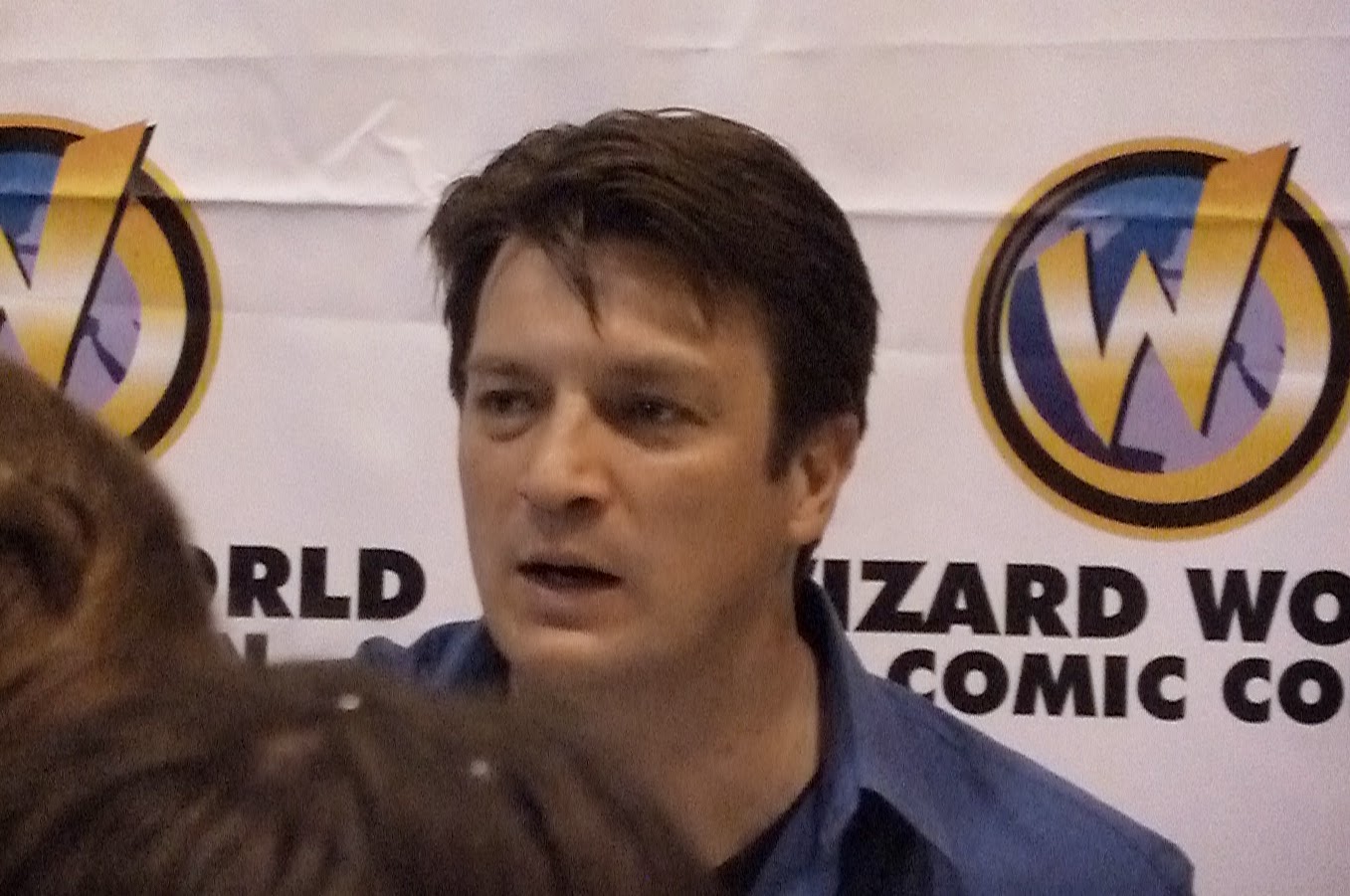 Then it was finally time to join a few hundred of my closest VIPs to meet Nathan up close in the photo op booth. The line moved faster than Justin Bieber in a North Korean airport, and I knew I had to get my shit together fast in order to have my 3.5 seconds of Nathan Fillion time count. Once it was my turn, Nathan graciously turned down a hug (which I might have taken personally had I not known that he has very specific requests about strangers touching him), but put his arm around me and thanked me for coming. Just a few minutes later, I picked up my 8x10 glossy reminder of this unforgettable moment and headed back to my hotel for the evening. 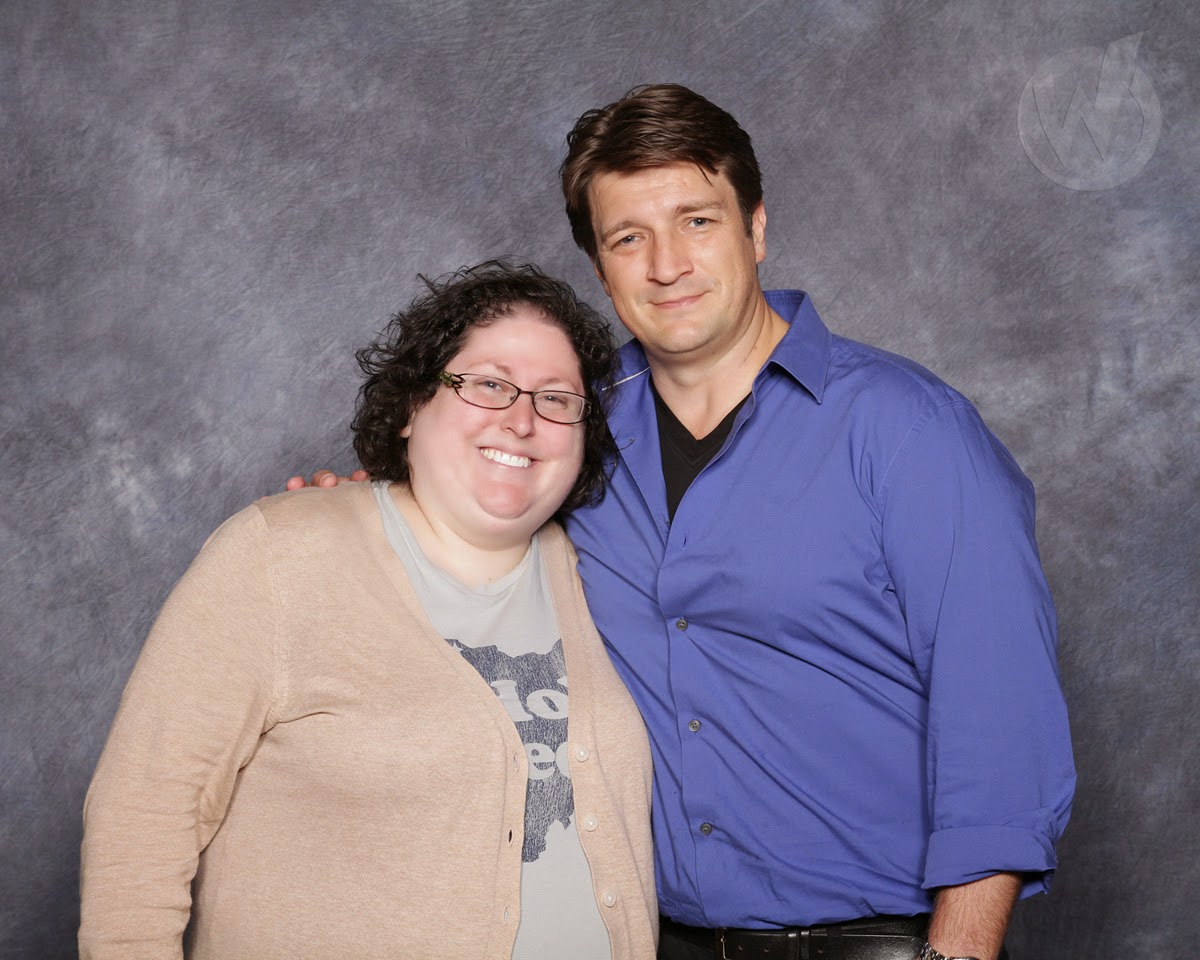 Sunday morning, after taking pictures of the Gateway Arch from a number of very artistic and very calculated (I walked in a circle around it) locations, I ate lunch at a deli named Monty's and went back to the dome for some more Nathan and more dreams coming true. Being a VIP meant that I got into the venue a half hour earlier than the common folk, and I waited for my turn to get Nathan's autograph. He was once again sick, but was seemingly in much greater spirits than the day before, touching his pictures on the poster above his booth and hamming it up for the crowd. There were about a dozen professional 8x10 photos to choose from in case you didn't already have something for him to autograph, but they let us take one or two either way. I went for this sexy black & white pose and the slightly more salacious, cuffed to Stana Katic Castle pose. 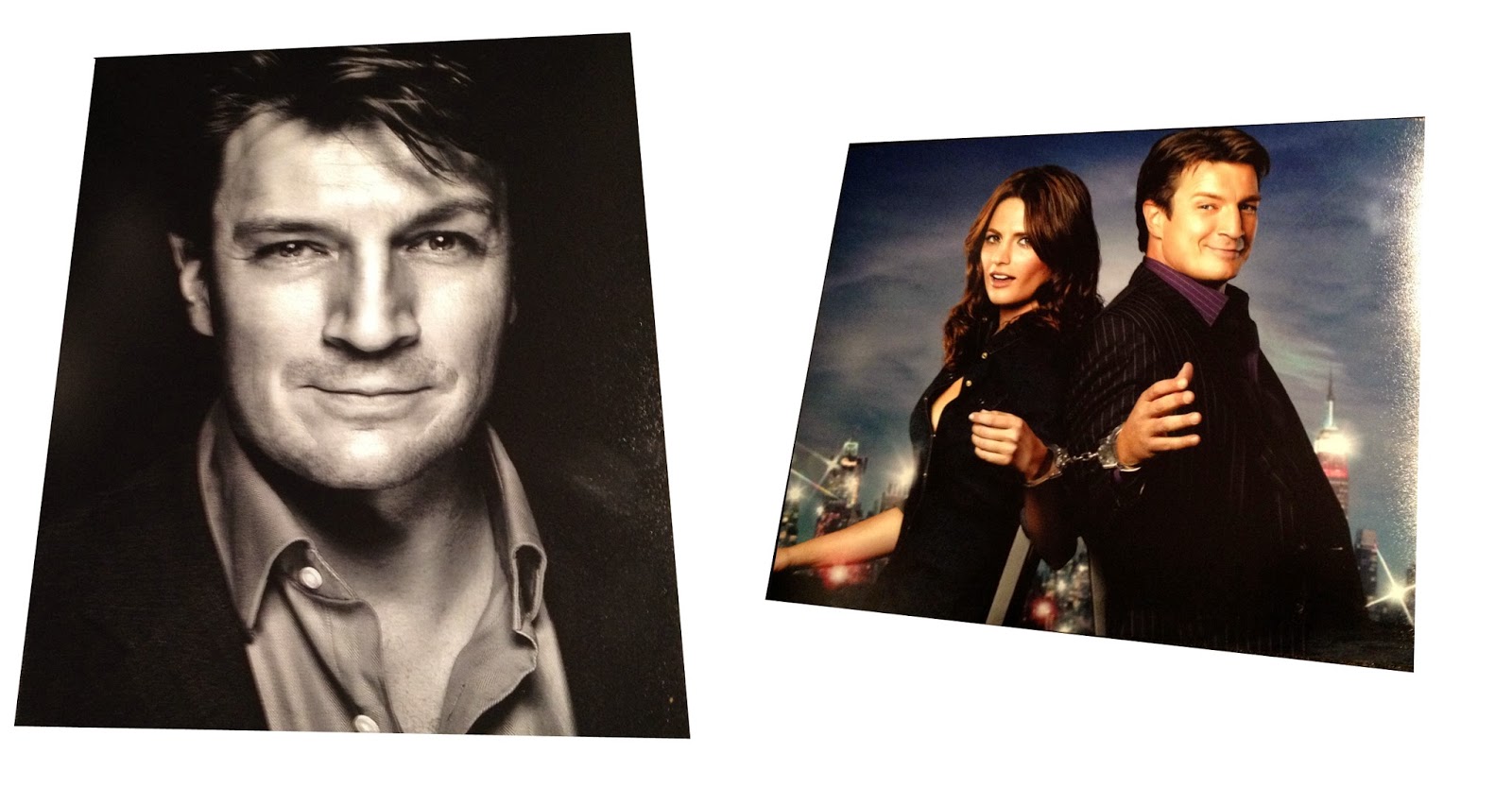 Then I handed Nathan my poster (to which he commented he hadn't "seen this one before" and I gave the talented Danny Haas a shout out), shook his hand to introduce myself, and told him that I hoped he wasn't too sick for his faux-nuptuals that is rumored to be filming this week on the Castle set for the season 6 finale. But he's too good, and he stayed spoiler free. 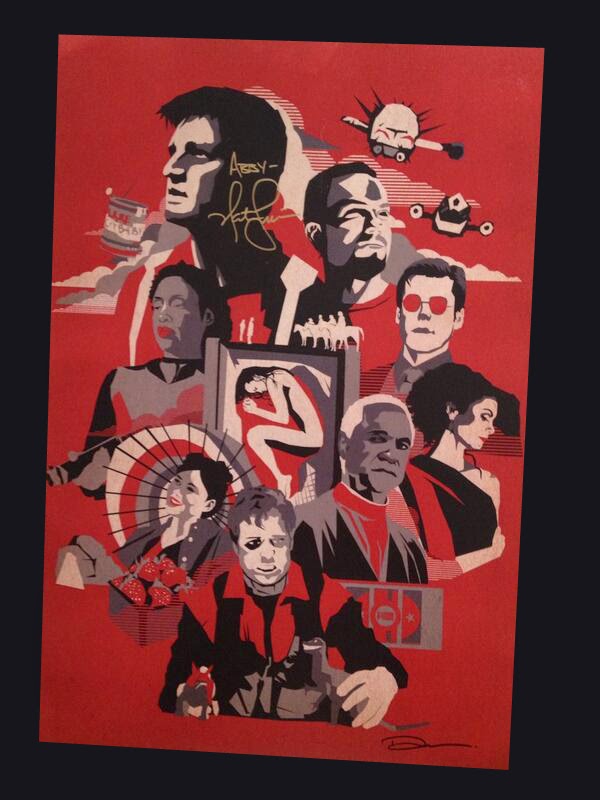 After the autograph session, it was time for Nathan to do another round of photo ops, which made me a little jealous of the people who got to stand with him in a small booth for another 3.5 seconds. Figuring this trip was a once-in-a-lifetime opportunity and how much money/time it took to just get to the convention, I bought another photo op pass and tried to think of a funny pose to do. Turns out I'm not so quick on my feet, and when I asked Nathan if we could do a funny shot, he told me to "turn around" (at which time my brain lost any function it ever had) and put his hands on my shoulders. I either had a mini stroke or did the first facial expression I could think of and left wondering what kind of face he made behind me. 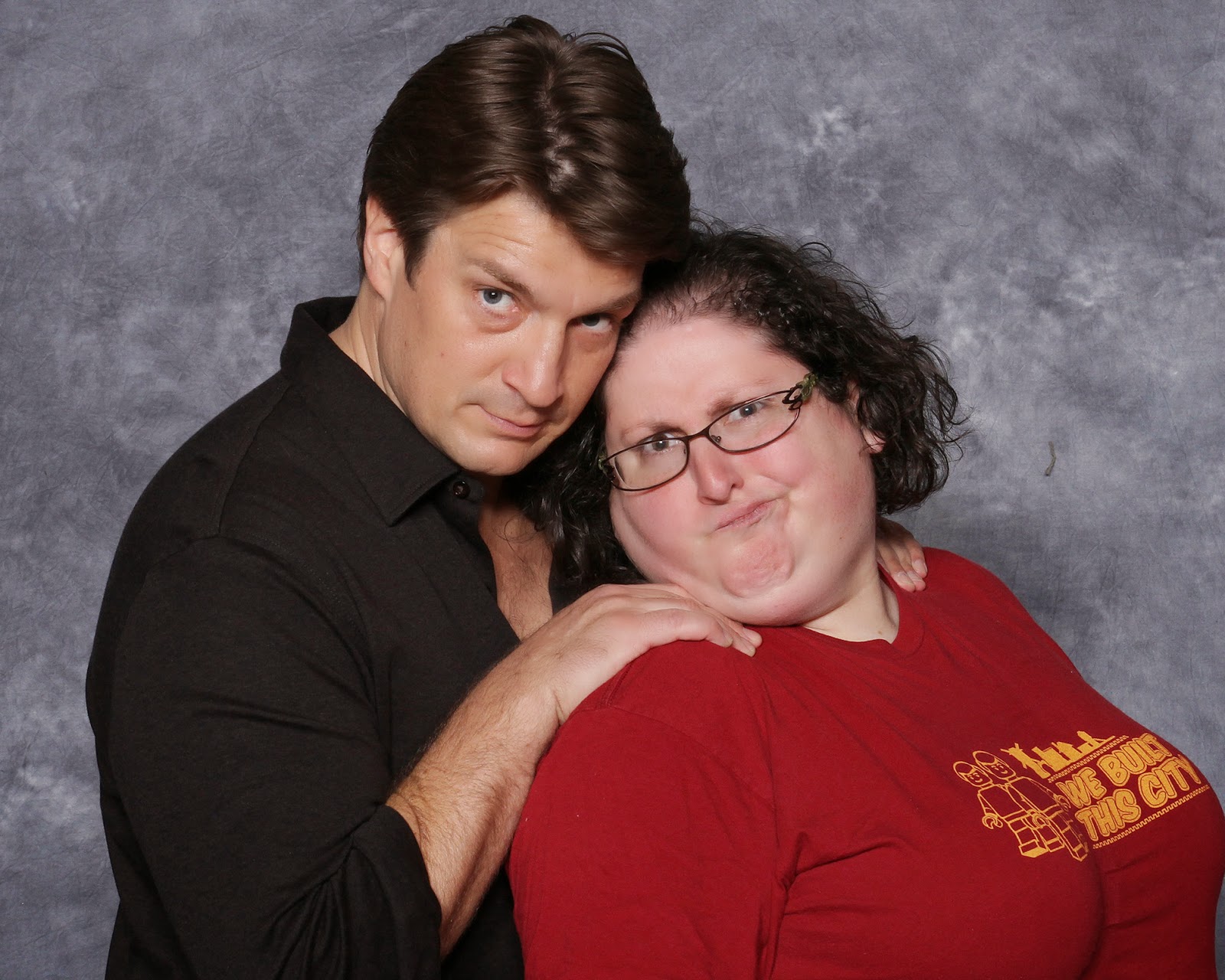 The very last Nathan Fillion event of the weekend was a Q&A panel with his Firefly/Serenity co-stars Adam Baldwin, Alan Tudyk, and Summer Glau. I knew that my VIP pass got me a guaranteed seat in the small theater, but I wanted to make sure I got a good spot and went early to the Dr. Who fan and Karen Gillan Q&A panels. I'm not a Whovian (guys, did you know that isn't a Dr. Seuss thing?), but Karen was adorable, gracious and hilarious. She totally gained my followship (is that a word?) on Twitter. 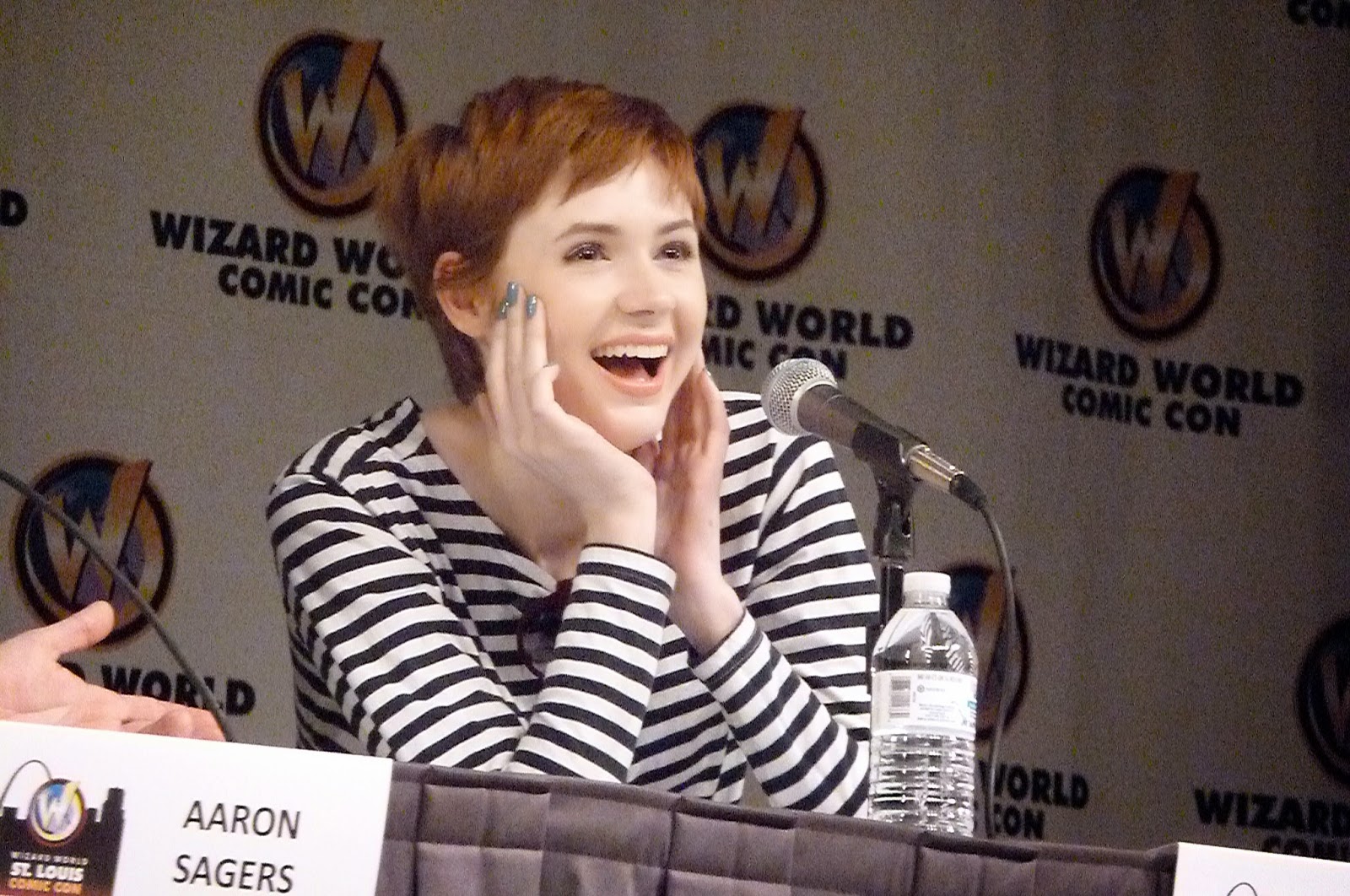 When it was time for the Firefly/Serenity panel, we were told Summer Glau had to leave and catch a flight to L.A., but the other three actors would all be there. There were two microphones set up for fan questions, one on each side of the seating area. Knowing I definitely wanted to ask a question (was there any doubt?) I got in line stage left behind 3 other people. The guys were introduced, coming on stage in a way only they could, and Alan noted that he would be giving out "some shit" from his bag to question askers. These items ranged from photos autographed by the three guys, a smashed and autographed Clif bar from the bottom of Alan's bag, an autographed Tucks butt wipe (unused), autographed scripts and merch from Alan's other projects (like 42), etc. 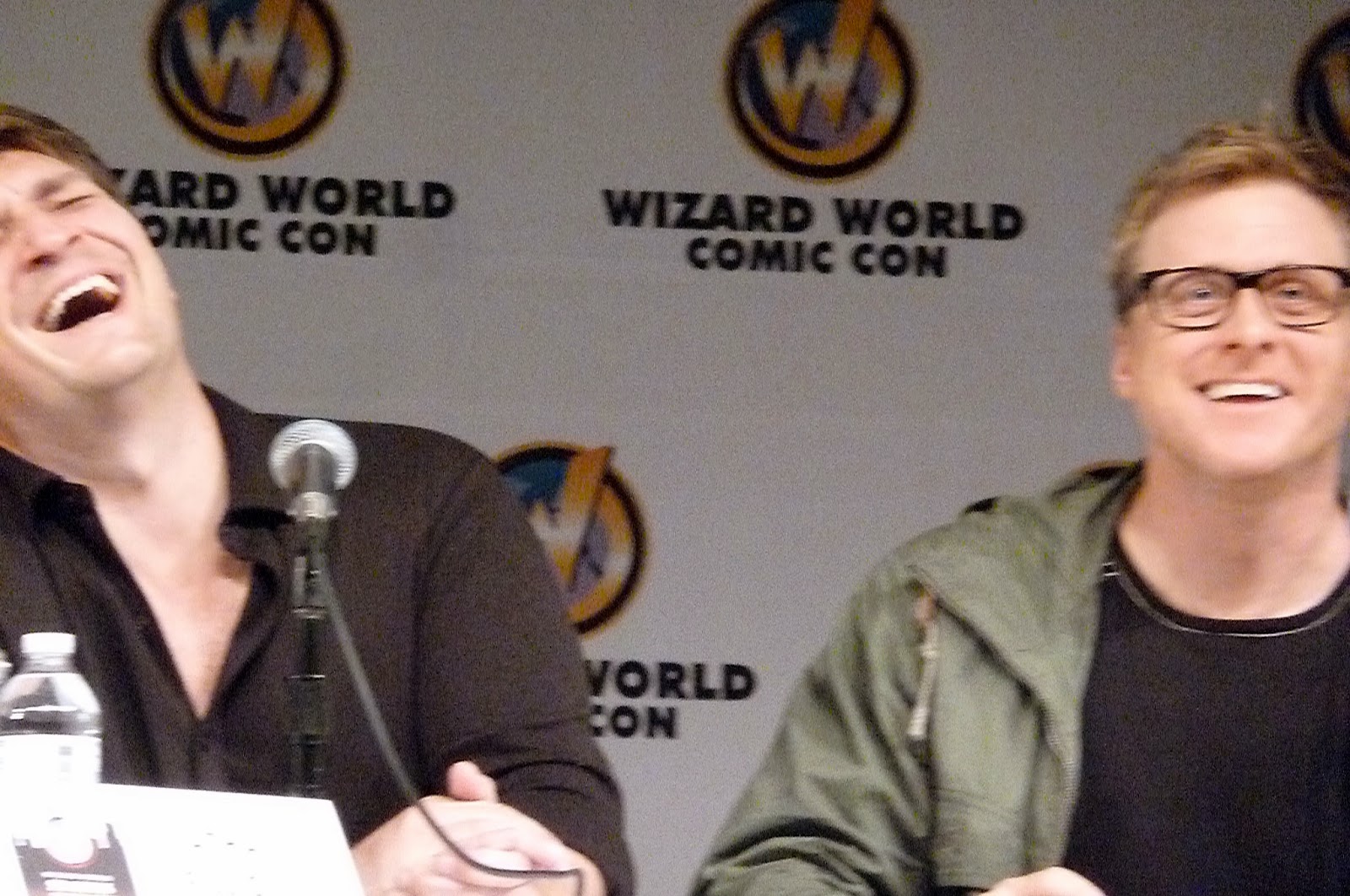 Here is my question (I was surprised to get so many cheers from the crowd, but it was extremely wonderful for my self esteem. I was also glad I decided against starting my question with, "OMG, Jason Bateman, I love your work!").

My "shit" was an autographed "The Last of Us" CD (I'm not sure what that is, and I don't think Alan was in it) and the following "business card" that Nathan autographs and passes out to fans who catch him out in public or when he doesn't have time to stop for a photo/signature. The boxes are not checked, but in my opinion, number 1 and 4 seem like an impression I could leave. 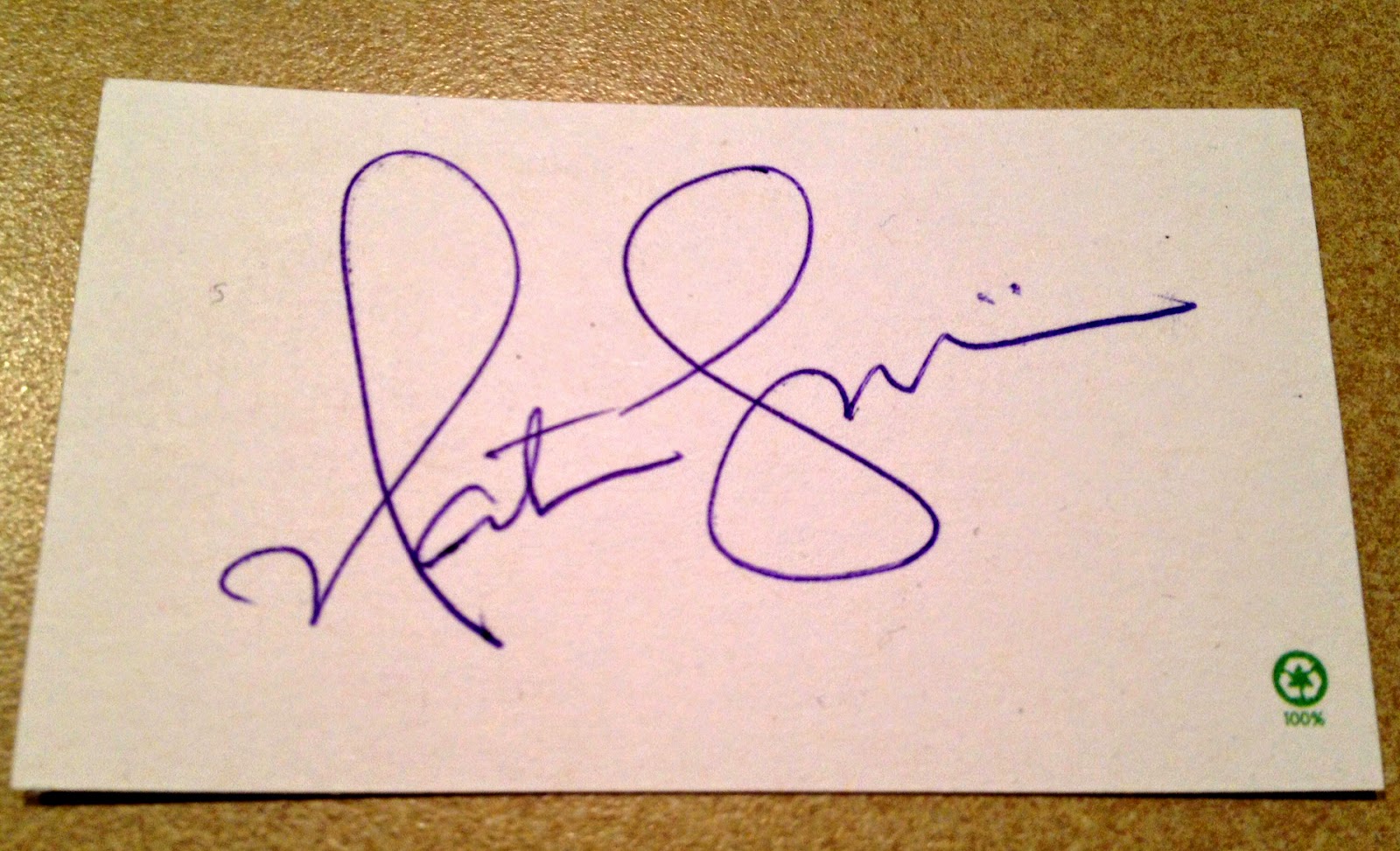 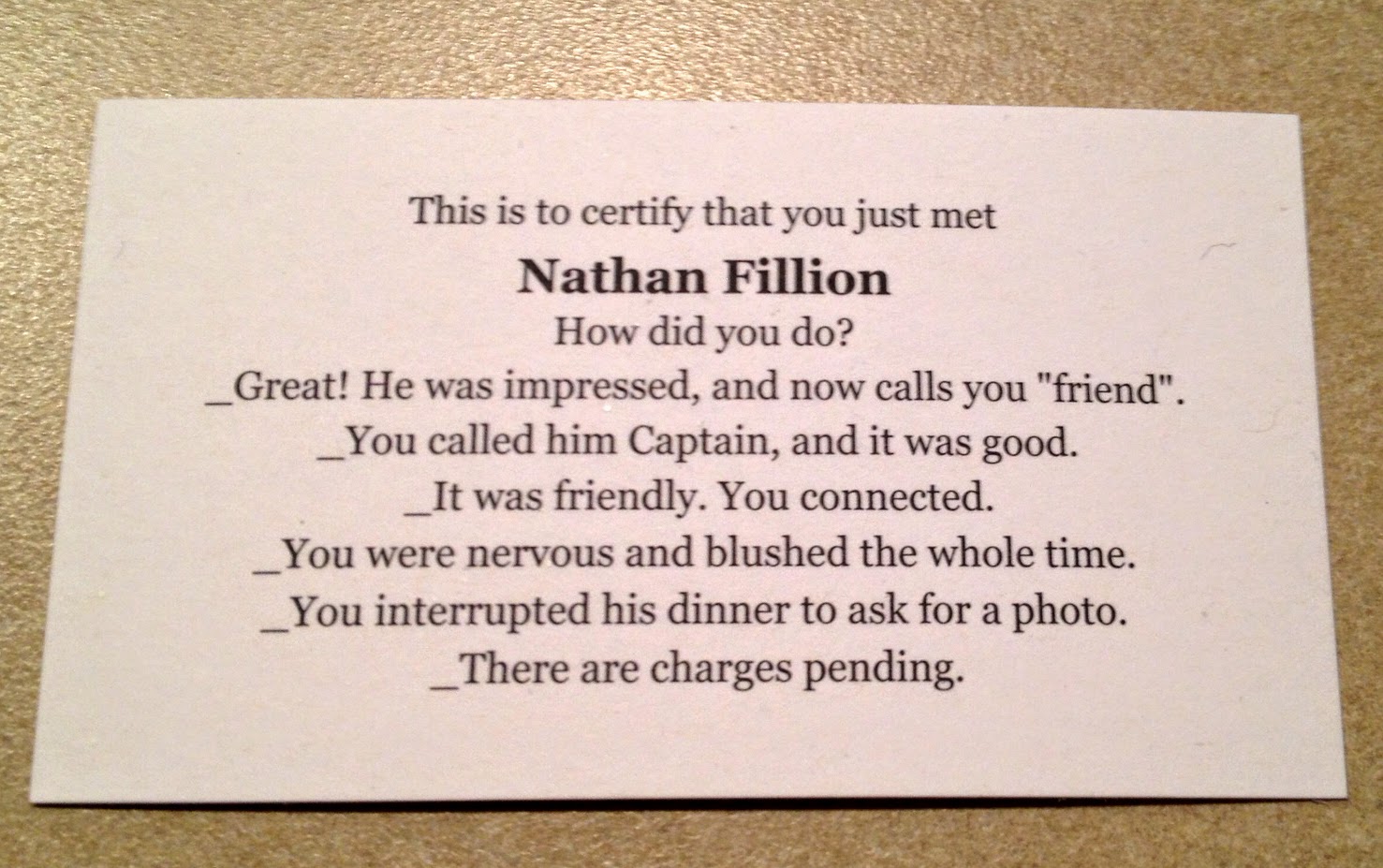 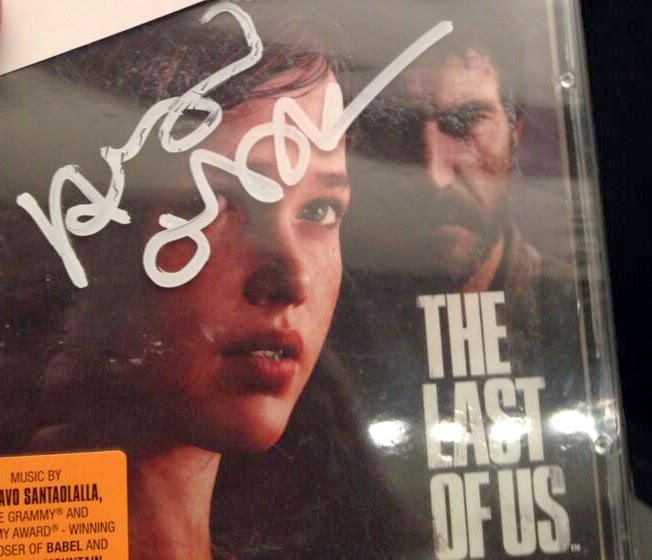 I watched the rest of the panel from my seat near the front and nearer to the center, but it was over far too soon. It's clear that these three guys formed a lifelong bond from what was just a 14-episode TV show and feature length movie shot more than 10 years ago. Their chemistry is undeniable, and I could have listened to them talk for hours. 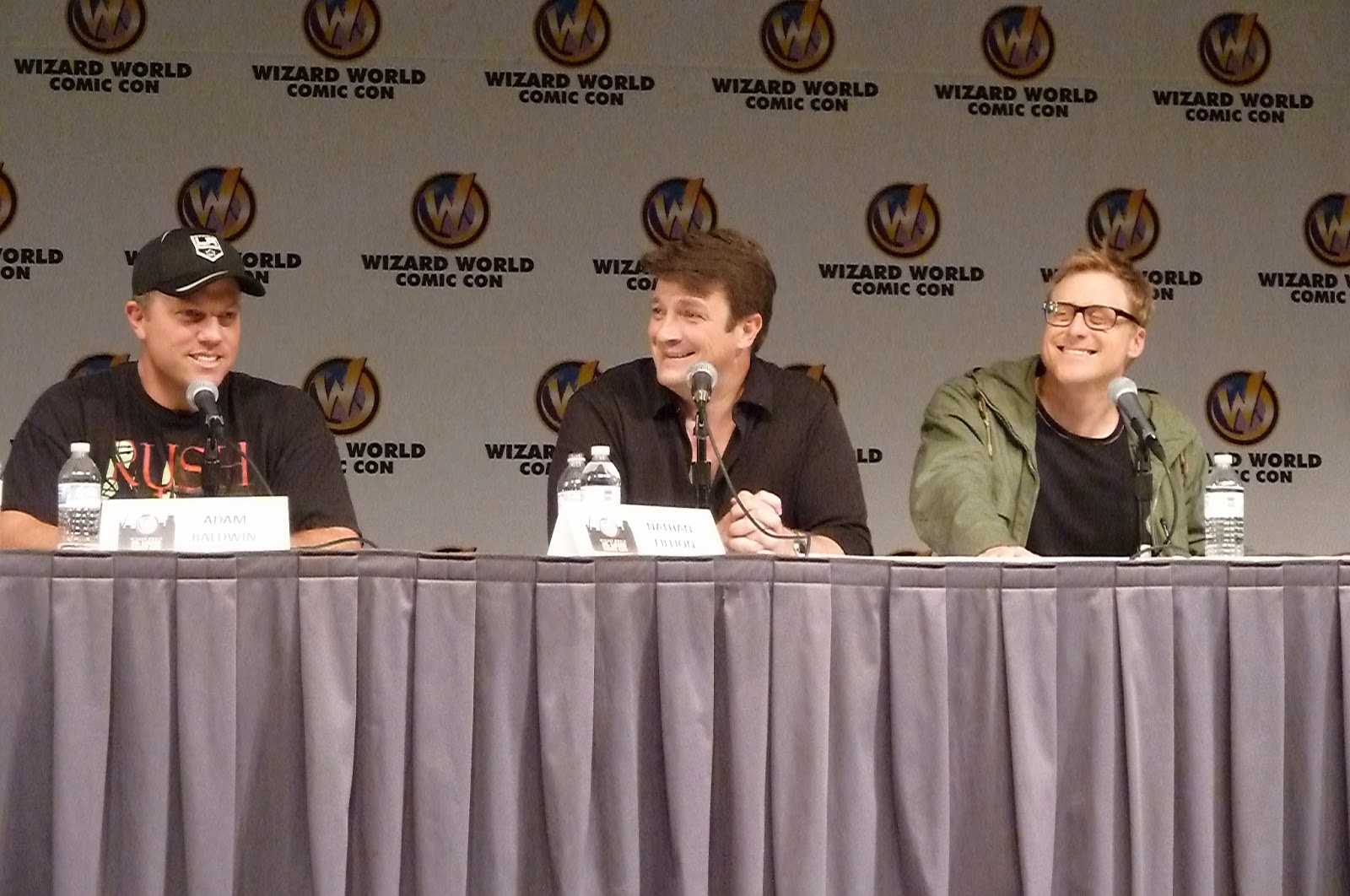 Then it was time to go home. What has become familiar to me as "after concert depression" set in, and I headed past the arch one last time and on my home to Toledo. This spontaneous and brief trip was something I struggled with for months (was it too expensive? Should I go alone?) but turned into one of the most memorable weekends of my life, and I can't wait to do it again sometime in the future. This time in a costume, like maybe the Priceline Negotiator.

All my photos are here and a few more videos (including the one below) are here.