What rhymes with Clarkston?

This week, Maroon 5 (plus sixth-man Sam Farrar) and Kelly Clarkson brought their dual tour to both Cleveland and Clarkston (), filling nearly four hours with non-stop hits and further cementing the obviousness of a joint tour with the two artists. Two of the most popular artists in pop(ular) music, they have also each been successful for over 10 years. They have each taken great care in releasing true-to-self music without degrading or being afraid of habitating the more pop side of pop/rock, and as a result were able to fill an entire evening with some of the most anthemic pop hits of the last decade. 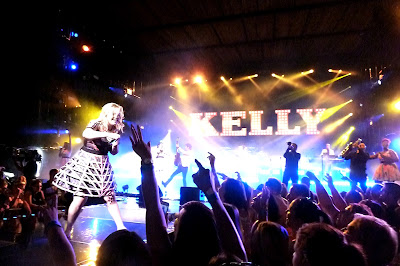 Maroon 5 and Kelly Clarkson have each grown up with their (diversely-aged) fans, evolving into the kind of people who get engaged (mostly them), buy homes (mostly them), and solidify 401ks (hey, there’s one for me!). Both acts have established here-to-stay-as-long-as-they-choose careers, and the result is a tour of like-minded (and admittedly mostly female) fans who live for this kind of sweaty, knee-cracking amphitheater tour with artists we've loved since our more flat stomached, higher energy level school days. 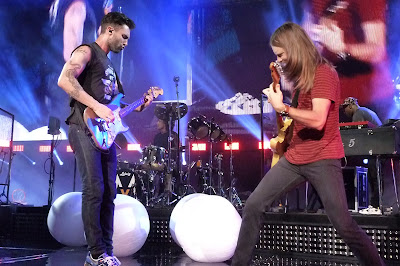 There was no pitchy stripping needed at either concert, and a 15-minute technical delay during Kelly’s set in Clarkston couldn’t even dampen the mood (either Detroit forgot to pay its bills, or Miley snuck into the electrical equipment to do some damage. Come to think of it, I’m pretty sure security found a Hannah Montana wig backstage). http://instantrimshot.com/

This tour is another must-see for any fan of music. It gets the "That's So Abby" thumbs up, AND seal of approval. You're so welcome. 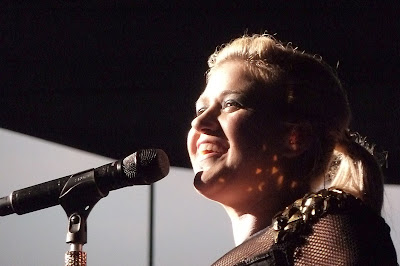 Both groups had the same setlist for each show:

Edit this setlist | More Kelly Clarkson setlists
Posted by Abby at 8/31/2013 No comments: 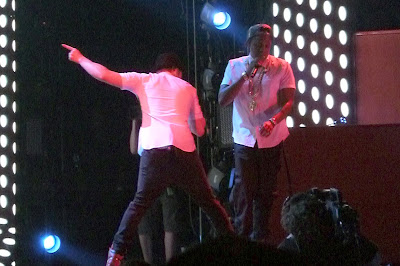 I'll admit, several months ago when Justin Timberlake/Jay Z concert tickets went on sale for a tour that would visit just a handful of cities, including one just an hour from me, the solid marketing hype plan of the two artists had me holding out my credit card and saying "take it all, I don't need to eat or have shelter." So, I jumped at the 9th row ticket that came up on Ticketmaster for the cost of seeing most other artists 5-6 times. But, as the show at Ford Field in Detroit became closer and closer, I started to get SexyBack remorse, and tried to sell my ticket online. But, when a concert is in a football stadium that doesn't sell out, that's not so easy to do. I ended up going to the show anyway, and it was perfectly entertaining. Both artists were just as exciting to see in person as you'd expect. But I couldn't help the nagging feeling in the back of my mind that this show was hugely overpriced (in a city that just declared bankruptcy), and I still couldn't see all that well from a seat that was marketed as 9th row seat but in reality located more Lions bench warmer than end zone. 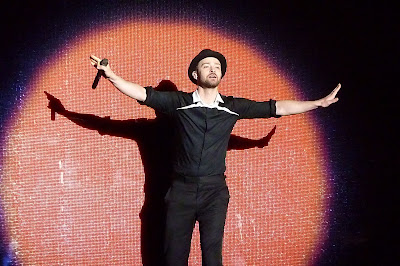 All in all, both Justin and Jay Z electrified the massive crowd as much as any artist could in such a large venue. And it was completely my choice to pay what I did for the concert. I guess one of Jay Z's 99 problems is charging a thrifty ticket price. Lesson learned.

Check out my photos here as well as a video I took of Justin and Jay Z singing "Forever Young" from Jay Z's The Blueprint 3: 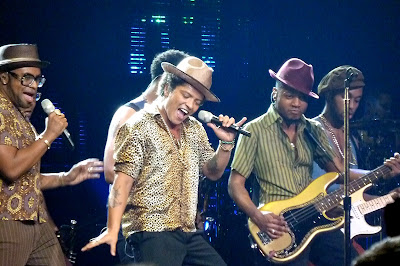 When Bruno Mars brought his Moonshine Jungle Tour to Detroit this summer, it was clear why he's one of the most celebrated artists in music right now. For 90 minutes, Bruno lit up the Palace of Auburn Hills with a list of massive past, current, and future singles that any musician would envy. The guy can really do it all, sing, dance, play numerous instruments, and charm a stadium crowd like it's a small theater. I urge everyone to go see Bruno in concert, if at all possible. He's truly a treasure. 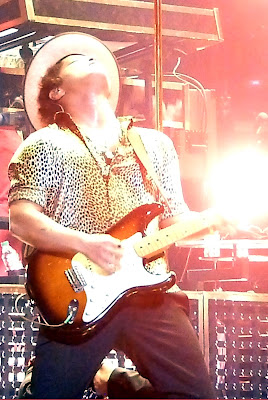 All of my photos can be seen here.

I Will Wait ... and Wait ... For Kelly Clarkson in Indianapolis 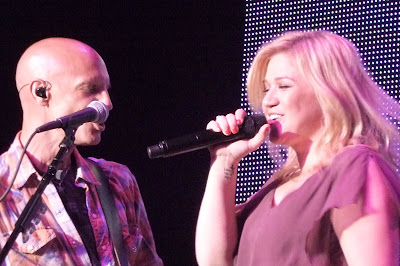 As one of Microsoft's go-to artists, Kelly Clarkson had a busy weekend at the end of June helping the company to promote two of its new Midwest stores - one in Troy, Michigan (near Detroit) and the other in Indianapolis. While the Troy concert was cut short due to heavy thunderstorms (not for lack of trying by a very wet Kelly to keep the show going), the Indianapolis show the next evening held promise for better conditions. Thus, while the Michigan concert was ending, I decided to "weather" (rim shot) the potential for more storms at Keystone Mall, where about 150 fans came out the night before to try to be part of the first 100 fans that would get to meet Kelly. 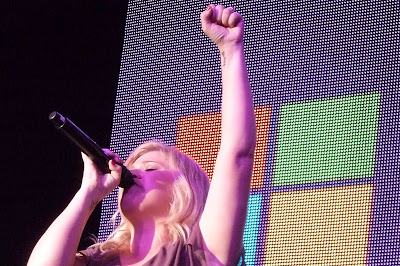 Just like in Cleveland in April, a group of fans spent about 13 hours in line (the majority of which was in a parking garage with conditions that would probably be frowned upon by a homeless prostitute) with the end goal of seeing a stellar outdoor Kelly concert and meeting her after the show. Our lives definitely sucked without access to clean toilets, but we stuck it out for the glory of a promised meeting with Kelly briefer than the career of a contestant from The Voice (ooh, burn).

In the end, us "lucky ones" got our wristbands for the show/meet and greet, and a few of us even got prizes from Microsoft, such as Surface tablets, an X-box, gift cards and more. As a result of a well-written and timed hash tag on Twitter, I was picked to win an autographed Fender guitar courtesy of the Microsoft social media team and Miss Indy herself. Clearly, I was thrilled (and I've already learned a few chords that will one day put me on track to play an entire pop anthem). 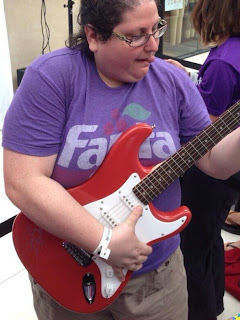 It turns out the weather was just as uncooperative in Indianapolis as it was Troy, but this time the Microsoft people had a backup venue planned (these people are pros. I guess you have to be with a brand as well-known as Microsoft, but I was constantly impressed by the staff, both in sight and behind the scenes, and its desire to make as many fans happy as possible; something that is never easy when you have a few thousand dedicated music fans in one place).

The concert went on as (sort of) planned at Latitude 39 down the street from the mall, and Kelly performed a full set in a Dave & Bustery-plus bowling alley setting that was much more intimate than any venue she's played in years. It was win-win for Kelly, Microsoft, the fans and that kid that hit the jackpot in the arcade and likely went home with a killer pencil sharpener.

Jason Halbert, keyboard player and musical director extraordinaire, was missed (due to a family emergency). As a result, instead of performing "Because of You," a concert staple since 2004, Kelly added a Mumford & Sons cover of "I Will Wait." Turns out that was a fitting addition for the fans who would wait nearly any amount of time to get a few moments with an artist who gets better and better every time she performs. There are very few people I would spend 13 hours in a parking garage waiting to see. But, don't worry, Kelly, a little hooker grime can't keep me away from you.

All my photos are here.

Edit this setlist | More Kelly Clarkson setlists
Posted by Abby at 8/04/2013 No comments: