All hail, Microsoft and Kelly Clarkson 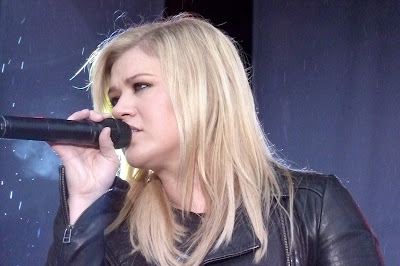 Over the past few years, Kelly Clarkson and Microsoft have developed a nice partnership. The latter has opened more than 30 Microsoft Stores in recent years, each one throwing a large-scale grand opening in its respective location with a big-name musician to help encourage fans to come out in even bigger numbers.

Along with Kelly (who has performed at store openings in several different cities), other artists who have taken part in these grand openings, putting on free-to-the-fans concerts, include Blake Shelton, Ne-Yo, Macklemore & Ryan Lewis, Neon Trees, Weezer, Train, The Black Keys and more. 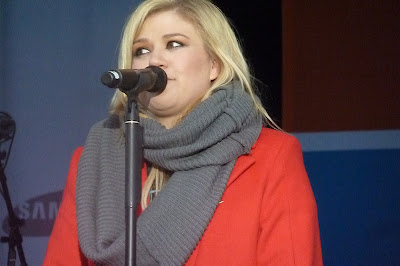 While I've bi-curiously teetered back and forth between being a Mac and a PC, depending on the situation, I'm all Kelly fan (clearly). When a new Microsoft Store opening was announced for Beachwood Place in Cleveland (just two hours away), on a weekend, with Kelly Clarkson performing a free outdoor concert, there really wasn't too much I had to think about. Besides, all the weather forecasts called for slightly chilly temperatures in the 40s-50s and little chance of rain. It would be fine, right? Read on...


One of the best things about these Microsoft Store openings is that, in addition to a a completely free concert for about 5,000 fans, the first 100-200 fans (depending on the artist) get to meet the celebrity as well. At the Beachwood Place opening, it was the first 100, and the line started at 10 p.m. Friday evening, 12.5 hours before the store was set to open and the glittery wristbands were set to be given out. Without going into a whole lot of detail about being one of the first 100 (strategy and research on how these events work are key), my friends and I all managed to get our "place holder" wristbands at 10 p.m., which ensured our ability to get the real meet and greet wristbands in the morning ... as long as we didn't leave the line throughout the evening besides quick trips to the bathroom or to our cars for supplies.

It really wasn't as bad as it seems, spending several hours bundled up next to a bunch of people with very similar interests (i.e. people who understand why in the hell you would ever put yourself in a situation where you're semi-sleeping outside a Maggiano's in Ohio in early April just to get about 10 seconds one-on-one with your favorite singer), some of which I've known and attended concerts with for over 10 years. And Microsoft gave us free meals from Subway, so we could eat fresh while we waited. 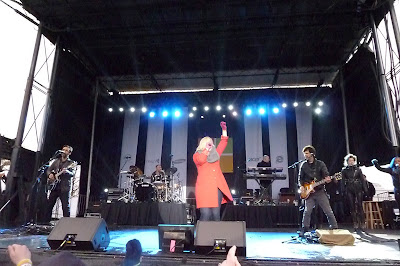 But, still, as it turns out the weather forecasts underestimated the actual torture threshold we would experience, when the skies opened up into a nice rain shower around 4 a.m. A few hours later, we were finally led into the mall with free coffee and a muffin to another line, where Microsoft gave out dozens of high-end prizes, like autographed Kelly Clarkson guitars, tablets, computers, headphones, and gift cards to raffle and Twitter winners. I wondered if the Twitter winners had to be non-iPhone users. Is Bill Gates that petty? Hmm...

At about 11 a.m., were entered the brand new Microsoft Store to receive our concert tickets and meet and greet passes. You can see in the picture below, taken as we entered the store, how close I was to the end of my sanity.

After getting the golden tickets, showering, and napping for a magical three hours, it was time to line up once again for the concert. There was once again tons of free prizes and food (fine Microsoft, I'll consider buying a Surface tablet vs. an iPad, stop making me fatter) as we waited for Kelly to take the stage. 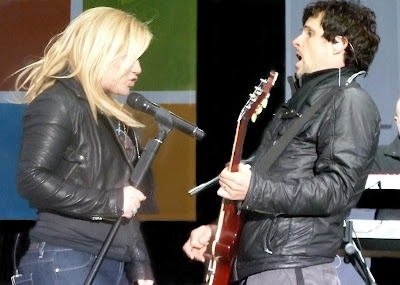 Despite the terrible weather (rain and hail alternating throughout the show), Kelly was her usual bubbly and brilliant self. She sang all of her biggest singles, including the three newest tracks from her recently-released Greatest Hits album, as well as her cover version of "We Are Young" by fun. Kelly seemed to feel sorry for us poor, waterlogged (but always enthusiastic) souls, as she gave each note more than her all and didn't hesitate to let the rain and hail come down on herself as well. 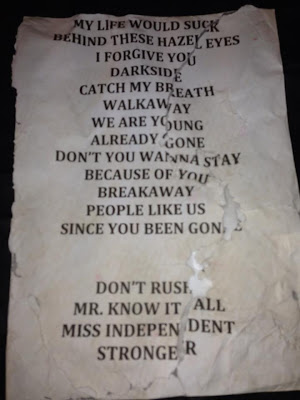 After the concert, as promised, 100 dedicated - and let's face it, delirious - fans finally got to meet Kelly. In case you're wondering, yes, it was totally worth it. After 10 years of a best friendship one-sided, pedestal placing, potentially unhealthy for a 31-year-old adult relationship, I know Kelly and I have a deep connection (and I'm totally first runner-up to be her maid of honor. She promised!). One that cannot be broken by a little bit of hail.

All my photos are here. Enjoy!