This past Saturday marked Kelly Clarkson's first ever concert at Radio City Music Hall, and also her first time ever in the building. Playing to a sold out crowd, she was clearly aware of and elated by the gravity of playing such a historic venue. 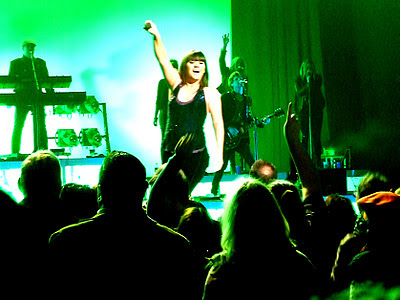 New York City *always* comes to Kelly concerts with fists held high (in the name of girl power, of course) and voices prepared to sing each heartbreaking and/or soul strengthening lyric. But this night was particularly special. It was only the fifth show of Kelly's "Stronger Tour," but she performed as if she had been perfecting her set for years. In a sense, she has, evident by the ease with which she sings her decade of massive hits, like "Since U Been Gone," "Because of You," "Miss Independent," "Breakaway," "My Life Would Suck Without You," "Never Again," "Hazel Eyes," "Already Gone," and more, each with a refreshed arrangement from previous tours. For example, "Already Gone" begins with a beautiful yet haunting six-part harmony and "Never Again" turns an angry "You Oughtta Know"-esque anthem into a somber piano ballad.

Country superstar and 2011 CMA Male Vocalist of the Year, Blake Shelton, kicked off his Well Lit & Amplified Tour at The Huntington Center in Toledo. I won four last minute tickets from an awesome music blog, JustJared, and the management of opening act, Dia Frampton, who you might remember from Blake's team on NBC's The Voice. The seats - row 13th row immediately next to the extended catwalk - were incredible.

Starting off his 21-song set with his high-energy rendition of "Footloose" (from the 2011 film remake), he spent the evening showcasing the strength of his vocals, his humor, and his loyalty to some high profile friends.

Highlights included a, seemingly, off-the-cuff song about Toledo, which he rhymed with a number of things like "neato," "speedo," and "torpedo."

He also performed duets with opener, Justin Moore, as well as Dia Frampton.

However, the definite peak of the night came from (I swear on her name it was) a surprise appearance by Kelly Clarkson, who joined Blake to sing "Don't You Wanna Stay," the Grammy-nominated duet typically sung by Kelly and Jason Aldean.