My, What Big Heart You Have 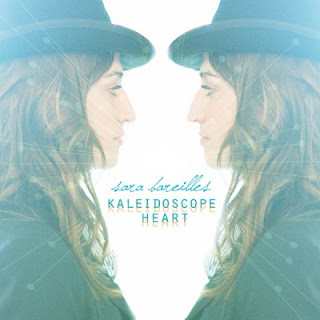 Queen of piano pop, Sara Bareilles, released her sophomore album (Kaleidoscope Heart) last week and – as of yesterday afternoon – has the #1 album in the U.S. with more than 90,000 units sold. The record is impressively complex, displaying Sara's eloquent writing abilities and knack for mastering a melody. The personal and professional growth since her solid debut, Little Voice, is striking.
Sara writes much of her music as she would a storybook. Like her song, "Fairytale," from Little Voice, Sara creates relatable worlds of princesses and heroes tired of dealing with life's monsters and masked villains. In "Not Alone," a sinister sounding track that samples an Alfred Hitchcock quote about Red Riding Hood, she sings, "You're making me feel, the monsters aren't real" and "You don't have to fight the bad guys, throwing punches out into the black. If you have to tell me lies, I don't care. Just give me some good back."

Yet, despite the cynicism often in her lyrics, she still hopes for a happy ending that doesn't compromise her strength, her heart, or her lack of desperation for Prince Charming.
As a writer myself, I'm incredibly envious of Sara and her ability to express thoughtfulness, symbolism, and wit so, it seems, easily. Even when portraying her sadness or pain, she exhibits a confidence and class that listeners can relate to on a number of levels. For example, "Gonna Get Over You" is a Billy-Joel esque track where Sara expresses heartbreak over a peppy, doo-wop track. "Maybe. It's a vicious little word that can slay me… I'm not the girl that I intend to be," she sings.
And in "Basket Case," she says, "I don't say much, and it'll stay that way. You've got a steel train touch, and I'm just a track you lay. So, I'll stay right here, underneath you. I'm just a basket case, and it's what we do."
Throughout Kaleidoscope Heart, Sara shows that the strength of a lyric can often be in phrasing, the artist's pauses versus the notes they sing. In "Blackbird," the following lyric makes sense only through Sara's voice and whispered interpretation: "Word came through in a letter. One of us changing our minds. You won't need to guess who. Since I usually do. Not send letters to me. That are mine."
Experimenting with different sounds, instruments, and rhythms on the record, Sara incorporates her own skills with piano, acoustic guitar, harmonica, and synths into various tracks (the first three instruments are all played by Sara on "Basket Case"). Having performed a handful of the songs live already, she brings the songs to life with a talented backing band – including Javier Dunn, Josh Day, and Daniel Rhine – strengthened by its immense chemistry.


Even through sadness, Sara sees a light, a glimmer of strength. At such an early point in her career, it will be fascinating to listen along to how her fairytale progresses.
Posted by Abby at 9/15/2010