Let's Get Crunk Cause Lilith's Back

This past Tuesday, I traveled to Cleveland(ish) to see Lilith Fair at Blossom Music Center. Sarah McLachlan's late 1990s vision – to celebrate women in music at a time when men dominated the industry – was revamped this year and features dozens of female artists from an array of ages, genres, and fame levels.

Ever since tickets first went on sale in March, the drama has been palpable. Ticket prices were too optimistic for a down economy and had to be reduced drastically to prevent empty venues. In addition, logistical information trickled out slowly (and sometimes not at all) and about a dozen shows (predominantly in the South) were canceled due to soft ticket sales or – in the case of Arizona and Nashville – political and societal trepidation.

Pigeons to Kings of Leon: "No"

Everybody is a critic. According to Just Jared, Kings of Leon canceled their concert at St. Louis's Verizon Wireless Amphitheatre Friday night when a pigeon relieved itself a little too close to bassist Jared Followill's mouth. The band had played just three songs.


After the Nashville-based band performed “Taper Jean Girl,” the third song of their set, drummer Nathan tweeted, “So sorry St. Louis. We had to bail, pigeons sh–ting in Jared’s mouth and it was too unsanitary to continue. FULL REFUNDS 4 ALL. SO SORRY. Don’t take it out on Jared, it’s the f–king venue’s fault. You may enjoy being s–t on but we don’t. Sorry for all who traveled many miles.”

The band's publicist also released the following statement:
Read more »
Posted by Abby at 7/24/2010 No comments:

You've seen me mention previously how big a big fan I am of The Ark in Ann Arbor. It's definitely one of the best concert venues in the Midwest (and I've probably been to most of them at one time or another).

I received an email today that The Ark is looking for a part-time, short-term Office Assistant. The job is for 15-20 hours per week, starting in October and lasting 5-6 months. It seems like a great opportunity for someone looking for some work. Good luck!

Open Up Your Plans, and Damn You're Free... To see Jason Mraz this Fall

Jason Mraz - master lyricist, singer, and mind blower - has announced the dates and venues for his upcoming fall tour. Rumor has it that he has a new album coming out soon and that there might be a few new tracks previewed at the shows. Check out the list below to see if he's coming to a city near you. 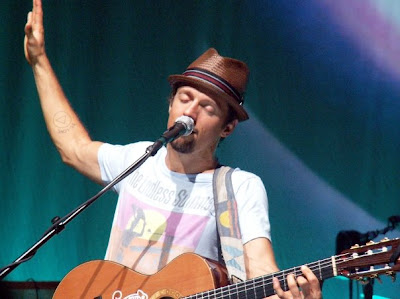 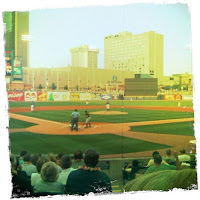 Saturday night I saw the Mud Hens play the Indianapolis Indians. We gave up a 1-0 lead in the 9th and couldn't recover. The Hens are really having a rough go of it this season, and the players don't have the name recognition they did in years past. Still, it's pretty hard not to have a good time supporting the world-famous team.

On Sunday night I drove up to Royal Oak, Michigan to see OneRepublic perform with special guest, Sara Bareilles, and opening act, Alpha Rev. I hadn't seen Sara live in over a year, so I was really looking forward to her set. She came right out of the gate with her smash hit, Love Song. That was a pretty unusual yet smart move, because much of the crowd – who may not have been too familiar with her – became immediately excited to hear those recognizable opening keys on the piano. 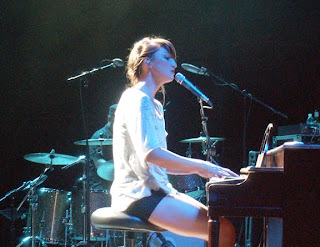 
One of the great things about Twitter is that it gives the feeling of being connected with hundreds, even thousands of people without ever actually meeting them. And if there’s one thing any fan wants, it’s to feel connected to their favorite bands. And as a band, you want your fans to feel close to you, but you clearly can’t meet them all.
Read more »
Posted by Abby at 7/09/2010 No comments: 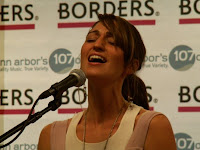 After the massive success of "Love Song," Sara Bareilles has risen high above the radar. However, she's much more than "Love Song," and she's one of the most talented singer songwriters out there today. Her new single is "King of Anything," a preview of her much anticipated sophomore album, Kaleidoscope Heart. Bearing a slight resemblance to Annie Lennox's "Walking on Broken Glass," Sara's track gives a nod to her previous success while at the same time displaying a musical progression that predicts even greater triumphs to come.

Did You Know I'm a Kelly Clarkson Fan?

Anybody who knows me knows I'm a Kelly Clarkson super fan. Mostly because I think she's super talented and super sweet. I plan to keep track of her upcoming happenings on this blog. For now, here's some of my favorite pictures I've taken at her concerts over the years. 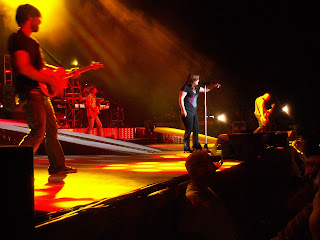 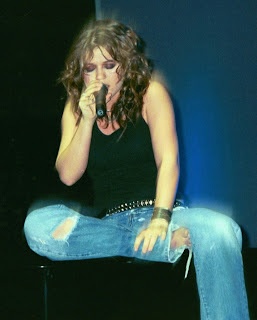 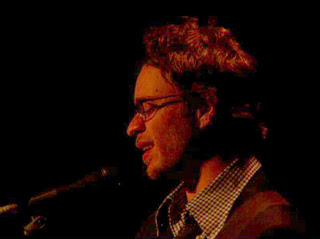 A lot of my favorite artists are under the radar, so I've decided to start a "Listen Proud" section of my blog to help share them with the world. First up is Amos Lee, a chill dude who makes my soul smile. His songs are in the singer songwriter vein of Ray LaMontagne or David Gray, but with an added splash or two of jazz.

I was lucky enough to see Amos live at The Ark in Ann Arbor earlier this year. The show sold out immediately because he's far too famous to play at the 500 or so seater venue. I love that he does though (and he does pretty often), because the intimacy of the place makes for a really memorable show.

Listen Proud to all his tracks, but definitely check out the following:

Arms of a Woman

Keep It Loose, Keep It Tight